Two years into the pandemic, ITI members were once again brought together through this year’s face-to-face Team Building Outing. It was the first physical interaction between staff members since the crisis pushed the sector further into the digital realm in 2020.

The event lasted for two days, covering June 25 to 26, 2022, and was conducted at the Tanza Oasis Hotel and Resort. As a precaution, all attendees were vaccinated and had their Antigen Tests taken for the outing.

The two-day program felt more like a mix of a reunion for long-time office buddies who haven’t seen each other since the pandemic and a meetup for employees who recently joined the team at the height of lockdowns and travel restrictions.

Here’s a recap of what happened and what made the event especially precious to us:

4AM to 8AM. The early bird catches the bus

The sun was yet to open its eyes when the initial reunion began. The call time was set at 5:30 AM to allow attendees to comply with the antigen test requirement. Funnily, despite the early call time, some employees already arrived at the agreed meetup place even before the clock strikes five.

Our project director, Ms. Charity Santiago, and  Sr. system administrator, Sir Paolo Santiago, along with Phoebe, their 7-year-old daughter,  secured the ‘early birds’ title, by arriving at around 4:40 AM. Shortly after, other employees who are just too excited to see each other after two years of remote work flooded the office, resulting in an early mini reunion.

The early comers waited for a while for others to arrive and left the office at around 6:45 AM. Before long, the bus arrived at the second meetup location at SM MOA and picked up our other colleagues.

At around 8:25 AM, we arrived at the Tanza Oasis Hotel and Resort and waited for the day to unfold. 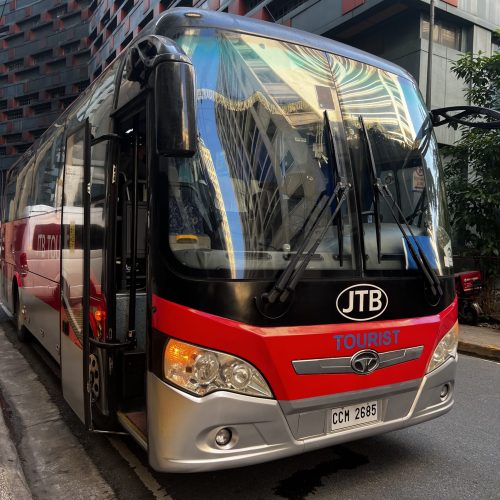 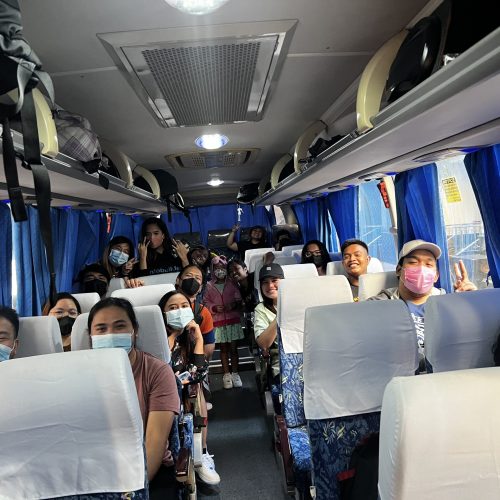 9AM to 1 PM: The Nice to Meet Yous and Good to See Yous

The arrival at the resort was quickly followed with a shower of smiles and laughter. Colleagues whose friendships date back to pre-pandemic days were more than happy to see each other once again. Long-time employees were ecstatic to finally see the new hires in person.

Some didn’t waste time to catch-up. Others roam around the place to freshen up. A limited few also took the opportunity to recover from the travel fatigue.

Overall, everyone just enjoyed the presence of the crowd that, strangely enough, felt all too new yet familiar all at once.

At 9:30 AM, snacks were distributed. The short meal was followed by an orientation by the resort.

At around 10:30 AM, everyone was free to do whatever. At this time, the group dispersed into a crowd of two: the boys went on to play a game of basketball, while the girls roamed around the beach to have their own chitchats. The free time lasted for over two hours. It was a good refresher after hours of travel, especially for those who came straight from the provinces.

Finally, lunch was served at around 12 NN. The team waited for about an hour to finally check-in at their rooms and prepare for the team building activity 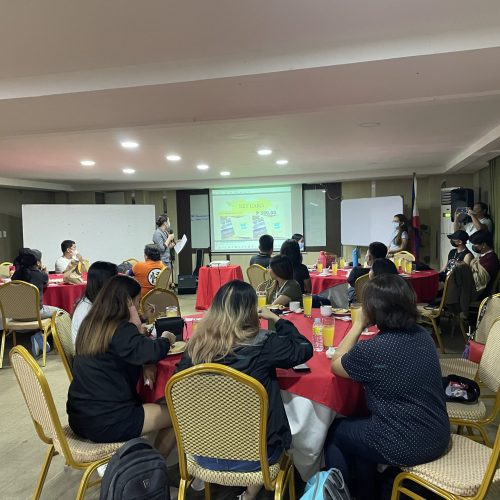 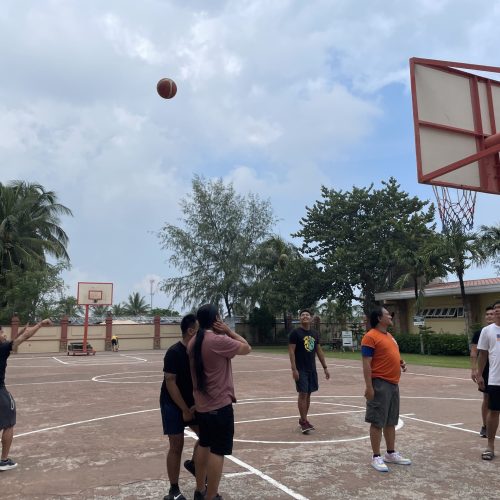 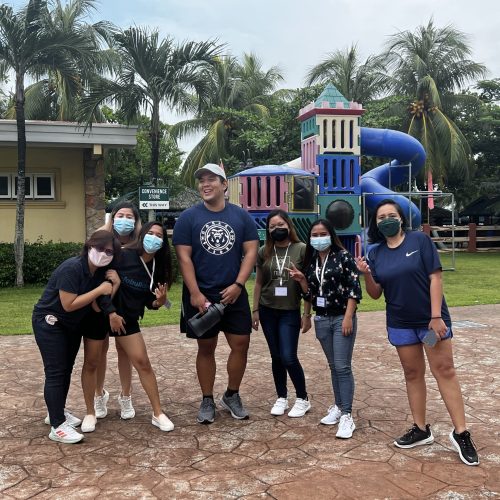 The first team building activity started at around 2:00 PM. Ms. Bel Reynon, the Compliance Manager of Infobuilder, opened the program with a hearty message to all ITI members.

It was a fun and exciting program. Employees had to sweat their way through the obstacle course, balance ball race, balloon race, marble rumble, caterpillar race, and unity walk.

In the end, the Red Team, composed of Dave, Azie, Philip, Elton, Raxx, Erika, and Elaine, emerged as the winner by one (1) point. 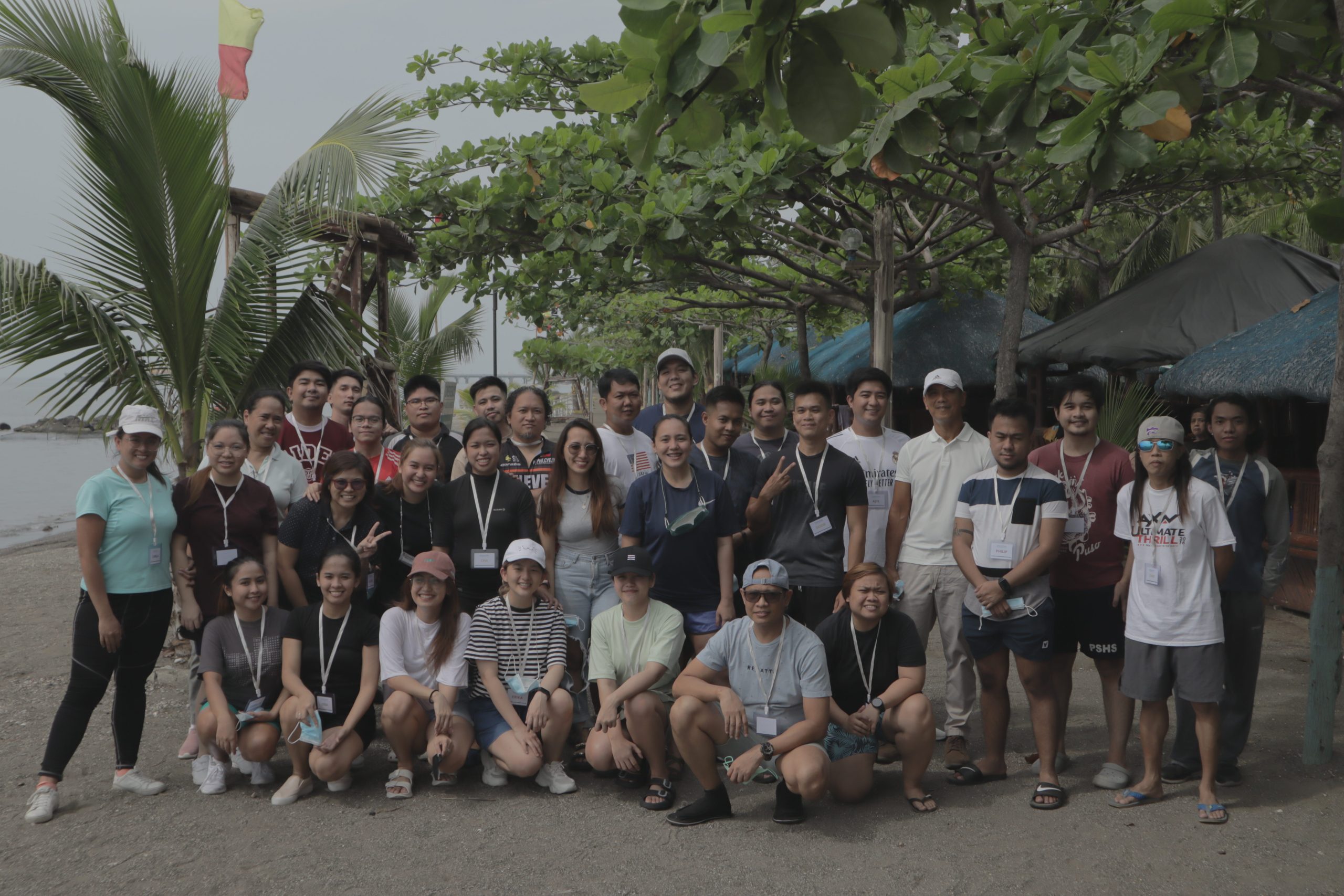 4PM to 6PM. Swims, Dreams, and Everything in Between

Of course, after the vigorous activities comes the breather. Attendees were given yet another couple of hours to exhaust according to their whims. Some took advantage of the free time to take a quick dip, while others simply resigned to their rooms to steal a few hours of sleep.

Dinner was set at 6PM, followed by the night program. During this time, everyone was already in their all-white attire. Mr. Enrico Ibana, the Managing Director of Infobuilder, opened the program with a heartfelt message, sharing his joy of seeing his employees once again. Our very own HR, Abs Villanueva-Berida, and our Business Analyst, Elaine Aquino, served as the emcees for the event.

Before the actual program, employees had the chance to deepen their bond through a little Ice Breaker game. The rules are pretty simple. We were divided into two teams and had to line ourselves according to the categories given, such as birth dates, shoe sizes, and years of service in ITI. Of course, the teams had to reshuffle numerous times before they got the perfect formation. Once again, the game ended with the Red Team on top. But in between the rush and confusion, we were all able to get to know each other a little better.

The ice breaker was then followed by a series of intermissions. Everyone got to enjoy each other’s company, reminisce about the normal office setup, and share how life has been so far – all these while being serenaded by our co-workers who sure knows how to throw a concert.

The singings and chattings were followed by yet another series of lengthy talks and uncontrollable laughter. This time, stories are shared in front of the night fire. We took out our roasting sticks, poke the marshmallows onto them, and held it over the fire until roasted. It was the perfect bonfire … if only we didn’t burn most of the marshmallows we had. 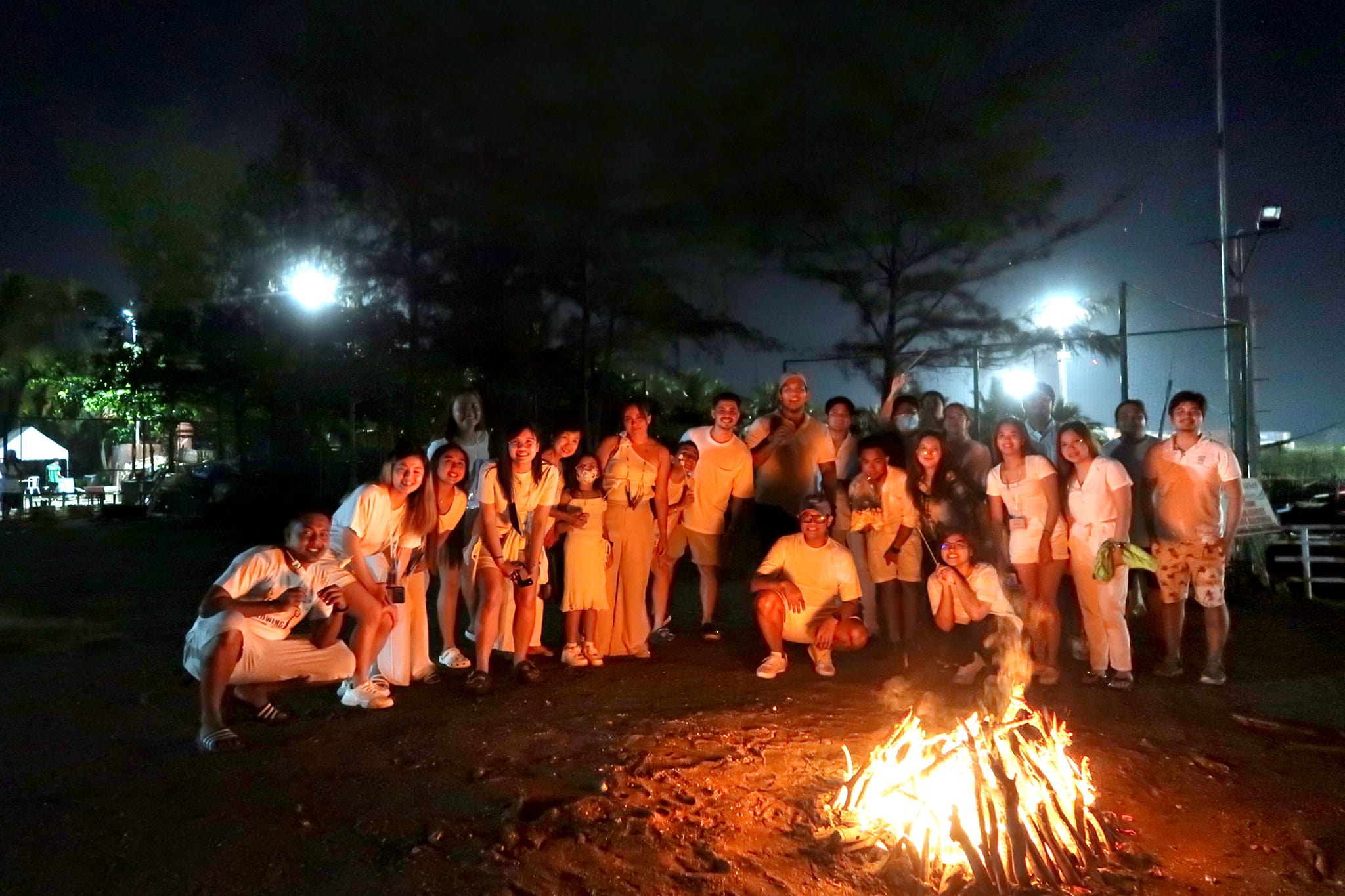 At 9 PM, the group finally reached the main event of the night. The “Ring of Fire,” the second team building activity, is the culmination of the whole outing. The game has served as a tradition in the ITI in welcoming new members into the team.

In this game of wit and grit, a hula hoop is positioned vertically in a circus-style, and the participants must take turns going through the “ring of fire,” symbolizing their entrance into the company. But to add up to the thrill, they must pass through the other side without touching the sides of the hoop.

It was a fun and challenging game. The degree of difficulty varied from person to person. Everyone had to think and try out different tricks just to drive each other towards the other side without moving the circle. Indeed, the whole process tested everyone’s ability to think critically, trust each other, and overall act as a team.

Finally, after numerous attempts and do-overs, the ITI team managed to get everyone into the other side. The hours of hard work were of course paid off by a shower of warm welcomes on the other side, topped off by the familiar tune of Hall of Fame by The Script. 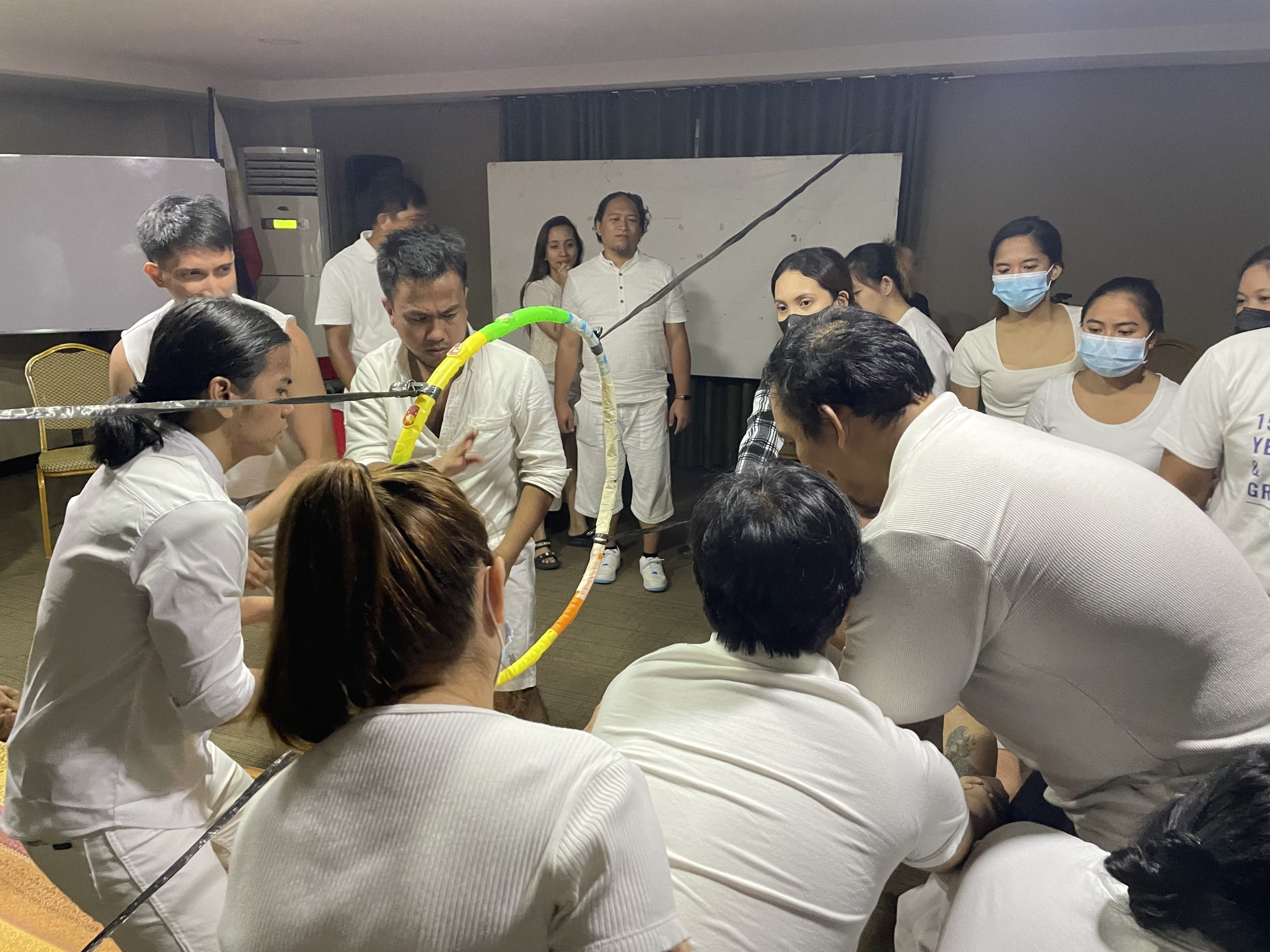 The Social’s Night immediately came after the game. It was a night filled with yet another series of singing, chatting, and of course, drinking. Originally, the Social’s Night was set to last only up to 11 PM. But thanks to the effort of our HR, we were able to extend it up to 1 AM. As if that wasn’t enough, some of us decided to continue the fun by throwing an afterparty inside our rooms until 5 in the morning. 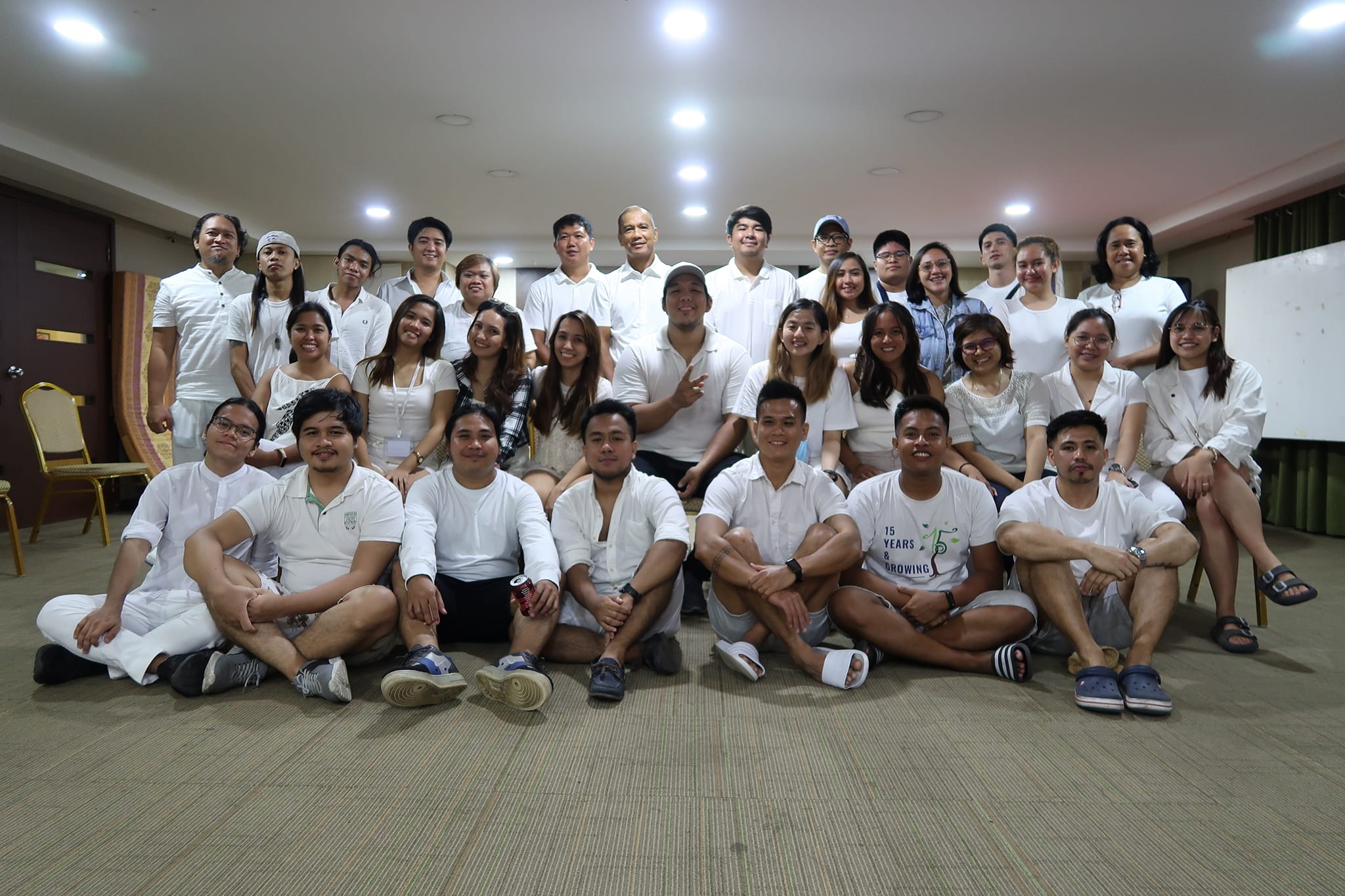 Of course, after the party comes the hangover. Well, at least, only for those who enjoyed the previous night to their heart’s content. But for the others, the morning after the social night felt just like any other morning. Some went for another round of swimming at the beach. Others just enjoyed the early morning breeze.

Breakfast was served from 7 to 10 in the morning. At 8:30, the knockings begin. Our HR, Ms. Abs, made sure that no one would miss their breakfast. Unfortunately, to those who have hangovers, the sound of the knocks felt more like an alarm that they couldn’t put off.

In the end, everyone was left with no other choice but to get on their feet, fill in their tummies, and finally, prepare for the departure.

At exactly 10:37 AM, the team left the resort. The bus arrived in Linden at around 12 NN, marking the end of our two-day team building event.

Admittedly, here at Infobuilder, our years of experience in providing IT solutions to businesses made us flexible enough to shift seamlessly into the online space. However, we still can’t help but crave for the usual face-to-face interactions with our colleagues from time to time. Luckily, with over two (2) years into the pandemic, we finally had the opportunity to have our face-to-face team building together.

We are more than happy to experience what it feels like being in a team, not just in an online setup but in the actual, material world. We are looking forward to welcoming more milestones together as we embrace the new normal.